are you tired of this? then return to latest posts 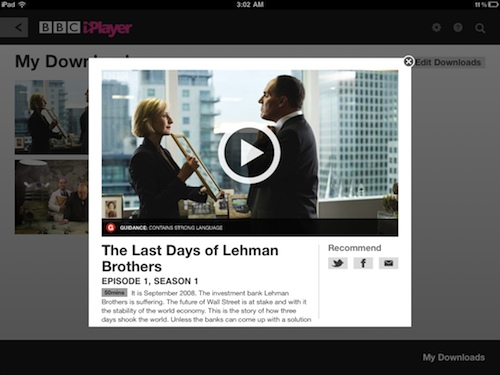 It is no secret that I've been a fan of BBC programmes for a very long time. When I was a kid growing up in Portugal learning English, Mark (the teacher) would bring Monty Python and Fawlty Towers sketches into class for us to pick up on weird accents, advanced vocabulary and quick-paced discourses. Whenever he did, it was like Christmas in the classroom. Even more than the odd day when we played games! Remember, we were kids.

Later on, I became a devotee to the weekly hour of British Comedy on our national tv channel. Everything from The League of Gentlemen to Little Britain, not forgetting Goodness Gracious Me and other classics.

So it will come as no surprise when I tell you I had been salivating for years. Whenever I heard someone I follow on twitter point to or simply mention BBC iPlayer, a little bit of me just wanted to pack the bags and move to the UK. You see, because up until now, iPlayer was limited to UK internet addresses.

That changed with the iPad version being released in 11 countries. And let me tell you all you need to know about the app in one phrase: it does not disappoint. No wonder, coming from the hands of Brian Fling's Pinch/Zoom. The only downside is you can't stream video over HDMI or Airplay to your TV on the iPad 1. Smooth-sailing on the second version of the tablet.

More than meets the eye

OK, we've covered how great it is. We might even mention that the €6 a month is a bit of a stretch... but think about it. I mean, really think about it.

Ever since the DVDs came out with regions, DRM has tried to put a ball and chain to cultural programmes. The thing is, people aren't only interested in what's produced inside their country. But as recent history has shown, content creators have been scared to death of letting us, inhabitants of countries besides the UK or the USA, get access to their creations.

Now, this is easily explained by fear of reduction of sales in DVDs or even with making local TV stations less interested in purchasing their shows. But this always stroke me as odd, since all we want is to give them our money. In a time where MPAA is getting their panties up in a bunch suing people left and right, I thought they'd be more willing to try new grounds.

That's where the BBC came in.

By giving this small yet corageous step BBC has set the example and provided an opportunity for us to show all TV networks around the globe this is the way to go, we're waiting for NBC and others to come and take our money—Hey, I wants me some fresh Jimmy Fallon, pronto!

A call to arms

It'd be silly for me to try and tell you what to do with your money, but I'll just leave a small thought before letting you on your way.

What if the BBC iPlayer was such a hit, that TV chains all over the world started creating the same model, perhaps even using non-proprietary formats and on a web browser without plugins? Baby-steps, my friends. That's why even if BBC had shitty content—which it most certainly hasn't—I'd be willing to pay for a couple of months just to tell the world what happens when you let us give you our money.